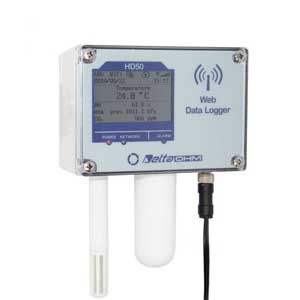 With the HD50 it is possible to start from 1 logger and extend it to a practically unlimited network of loggers. The HD50 settings can be opened from a web browser, as it has a built-in webserver. This way it is also possible to monitor the actual measurements. Delta OHM already has the HD35 serie, based on RF communication. In some cases when networks are very wide or complex or divided into more than 1 building, a mix of cabled, WiFi and Radio Frequency loggers can be the best solution. The HD50 series have the possibility to be integrated in such hybrid networks.